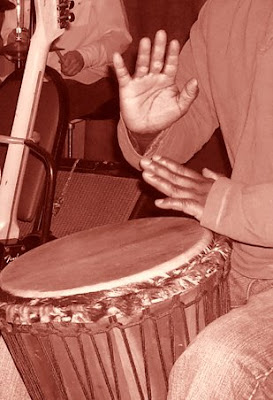 What a beautiful thing to look back on an important day in history and recall the details of what you were doing and how you were impacted so profoundly. As a recently transplanted resident to Asheville, I have been thrown in the middle of a flock of Obama Mamas and supporters, who had been waiting for this day for a long time. Don't get me wrong, I was and am 100% Obama. But there is something different in the North Carolina air that rings a bit louder than anywhere I have been since he began his campaign. The fundamental grass roots campaign that helped him win the election is still uniting the community through continued volunteering, faded Obama stickers on the back of car windows, hand painted lawn signs, and even the frequent cheer across a crowd of Yes we can!

I wasn't quite sure I realized the profundity of the situation until I sat and watched the inauguration at noon on Tuesday. When Obama won the election, I kissed and hugged a close friend and went to sleep feeling great about the brink of change our nation stood upon. But when he was inaugurated, I cried. I cried so hard and so unexpectedly as it all hit me at once. Granted we have a ways to go, but all of a sudden I realized I'm not as scared to look to the future. We have a black president. Someone who, amidst the complete chaos our country is in, calmly and confidently expresses that he is certain we can unite to make it strong again. Among so many other great things, we can take pride in our president once again.

All of this said, I don't want to get on a political soapbox, and politics is something that I rarely discuss with others. But Tuesday...this was not a night to be home in a city that comes alive after 10:00 and would be out joining hands in celebration of this amazing change. So while I was tired in the legs from a new dance class I had joined earlier that day (ugh...I am so out of shape!), and I had but a few bucks in my pocket, I went down to the Grey Eagle for the Obama Celebration. It was any other night at the Eagle since I have been there...the $2.50 drink specials...plywood floors...the smell of fried green tomatoes wafting in from the kitchen. But that night offered a certain magic in the air. Between the eclectic mix of a bluegrass and a sweet funk band, amidst the nag-champa filled dance floor, friends seemed to hug longer and smile harder when they greeted each other, chanting and stomping when the bands called out “Obama!” You could feel the change in the room alone, which made me excited for the rest of the world outside of the Grey Eagle, and all that is to come. 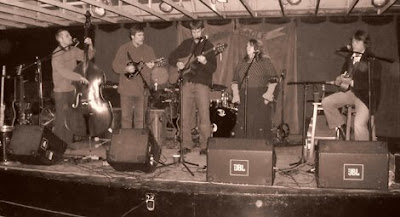 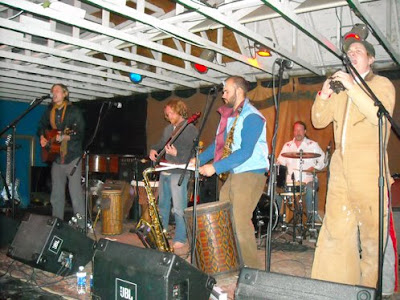 The evening's feature was 'Soul Driven Train,' a funky soul jam band, that ended the night in a beautiful drumming session. 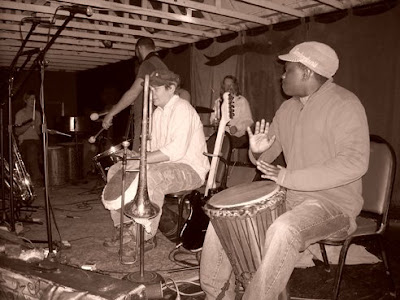 Posted by veggieartgirl at Sunday, January 25, 2009

Want to see some of my funky art?

Want to go back?

I have a cute little store!